SCIT traditionally finishes the academic year with an extracurriculum mock-conference organized especially for the Linguistic Support Department of the Russian MFA. This year the conference was held on-line. We decided to show the graduates at work with the languages that are most in demand in the MFA (they are English, German, French and Spanish).  The confrence was devoted to migration in today’s world. The speeches touched upon various aspects of the problem: the laws prohibiting to help illegal migrants in Switzerland, the influence of migratory processes on Russia’s economy, migration to the European Union, and even the Swiss enclave in Brazil. The speeches lasted 6 to 8 minutes, and  were interpreted consecutively in different language pairs; then there was a Q&A session, also interpreted consecutively. As a rule, questions and answers are the most difficult part of the conference. The MFA colleagues tried to find a weak spot, and brought in  the names of mushrooms and spices, difficult idioms, long quotations from the UN Secretary General, and even poetry. The graduates wouldn’t yeild, and showed good skills and potential for growth.

We are thankful to the colleagues from the Rssiam MFA who took part in the conference, asked questions and evaluated the graduates: Andrey Kleimenov, head of the section at the Linguistic Support Department, Victor Abramov, and  Daria Mandrova, SCIT graduate and currently a staff interpreter at the Russian MFA. We are certainly very grateful to all SCIT trainers who put time and effort in preparing and holding the conference. 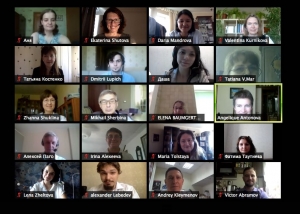